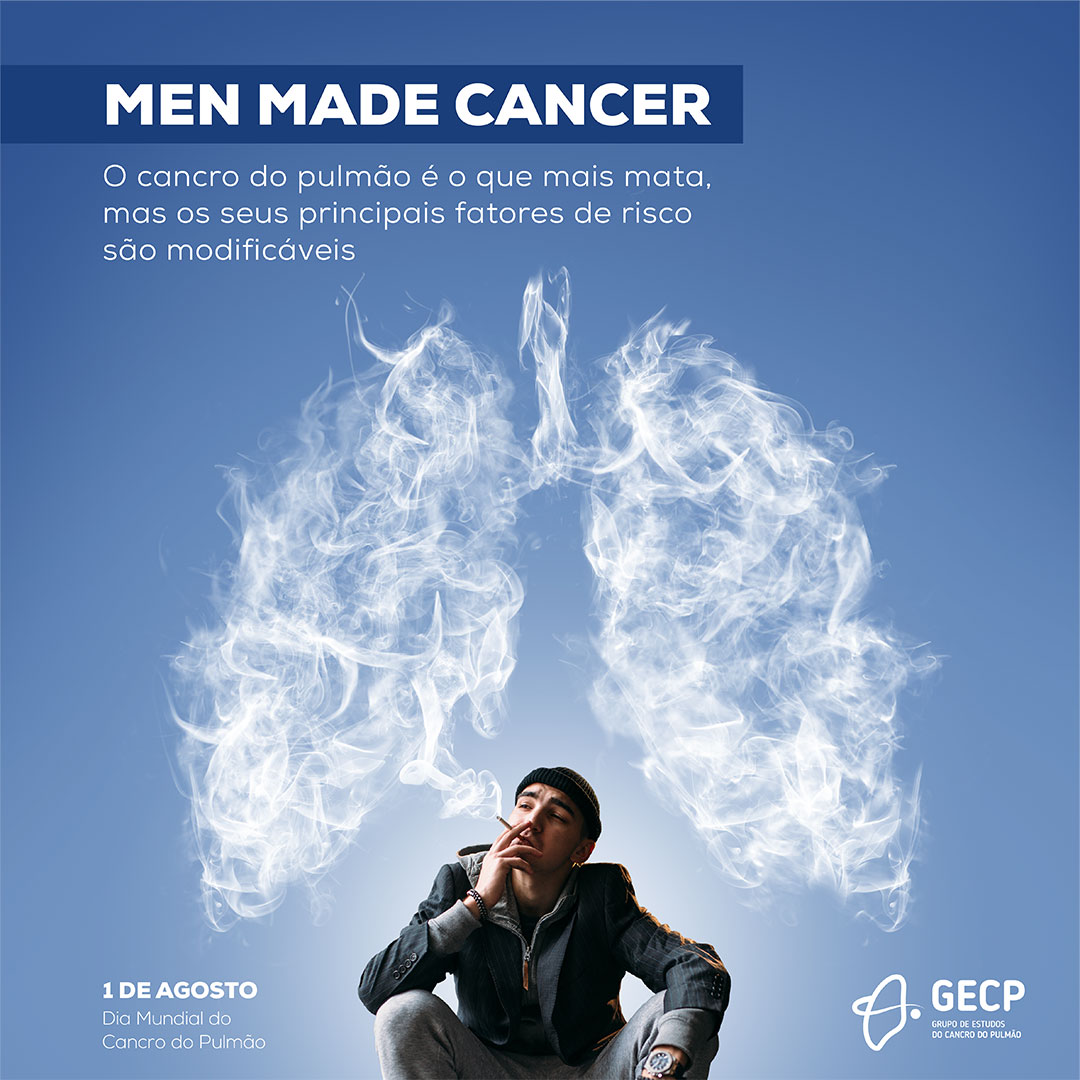 Men Made Cancer: “Lung cancer is the biggest killer, but its main risk factors are modifiable”

“Men Made Cancer” is the motto of the new campaign by the Lung Cancer Study Group (GECP) for World Lung Cancer Day, which is celebrated annually on the 1st of August. This action aims to alert the population to the modification of behavior, considering that smoking increases the risk of developing lung cancer by about 10 times and environmental exposure to carcinogenic substances is also a considerable cause.

“Based on the known fact that 80 to 85% of lung cancer cases are due to smoking, it is up to us to encourage the public to change this behavior through smoking cessation”, warns Dr. Teresa Almodovar, president of the Board of Directors. of the GECP. “We remind you that tobacco consumption is one of the main preventable causes of death in the world – eliminating tobacco and, in this way, acting in the prevention of various pathologies, including lung cancer, is in our hands”.
This means that non-smokers can choose not to start smoking and those who smoke also have the choice to stop. In this context, the doctor recalls that “quitting smoking is always beneficial and makes all the difference, whether in the presence or absence of a cancer diagnosis”.
Additionally, environmental pollution has also been identified as a considerable cause for this type of cancer. “There are several studies that refer to exposure to car exhaust gases, namely diesel. We also have exposure to asbestos, widely used in construction, and exposure to radon (a radioactive natural gas), as well as exposure to certain chemicals”. Also at this level, “man (human being) is responsible for all these factors that may be at the origin of a lung tumor”, points out the Pulmonology specialist.
In 2020, according to the World Health Organization (WHO), there were 5400 new diagnoses of lung cancer in Portugal, 4797 of which resulted in deaths.
In the campaign for this date, “the focus is on the actions that each of us can take to reduce the impact of this disease, whether in reducing exposure to tobacco smoke (active and passive), or in reducing exposure to the aforementioned pollutants” .
As it is a silent disease, which makes early diagnosis and treatment difficult, and which progresses quickly, “the fight must be on the prevention side”. Although with components to be explained and to be studied about all the factors in the origin of this pathology, “we can (and must) act on what we already know”.

About lung cancer:
Lung cancer is one of the most common cancers in the world. Its incidence increases at a rate of 0.5% per year.
In Portugal, around 5,000 new cases of lung cancer were diagnosed in 2020, representing the third most frequent neoplasm. It is, however, the leading cause of death from cancer in the country, estimated to have caused 4,671 deaths in 2018.

About the GECP:
The Lung Cancer Study Group emerged in 2000 as a result of a broad need to join efforts in promoting knowledge in Pulmonary Oncology. It brings together a multidisciplinary group of health professionals, maintaining close links with other scientific groups and societies, universities and civil society organizations.