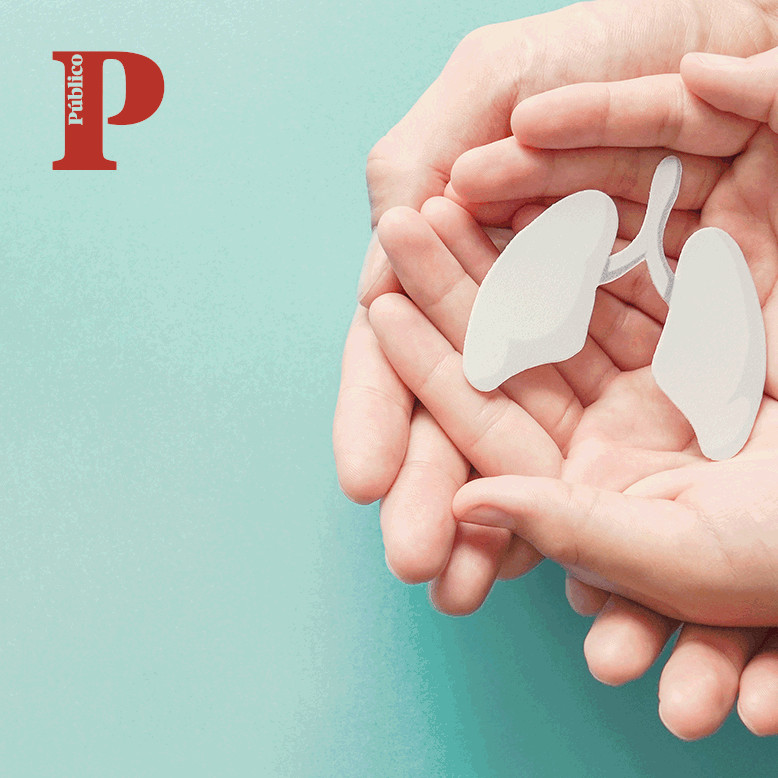 Article in the newspaper “Público” – with participation of Dr. Teresa Almodóvar

Lung cancer: knowing the symptoms could save your life.

The earlier lung cancer is diagnosed, the greater the chance of survival. Therefore, symptoms such as cough, tiredness, shortness of breath or chest pain should take you to the doctor without hesitation.

What is true for most cancers – that is, that early diagnosis is crucial for the patient’s survival – becomes even more true when the subject is lung cancer. This is because at stake is not only one of the most frequent cancers in the world – only surpassed, very closely, by breast cancer – but also the one that causes the most deaths. The World Health Organization estimates that, in 2020, 1.80 million people died from this cancer, 4797 of which in Portugal.

Paying attention to the symptoms that may suggest the presence of this disease is therefore fundamental, as highlighted by pulmonologist Teresa Almodovar, president of the Lung Cancer Study Group (GECP). November is lung cancer awareness month and the invitation is clear: seek medical attention immediately if you have symptoms such as a persistent cough with or without expectoration, tiredness, shortness of breath or pain in the chest area. Since “these symptoms are common to other respiratory diseases”, it is important to discover their cause as soon as possible, with a view to an early diagnosis and timely treatment.

Tobacco – the greatest enemy
Like all oncological diseases, lung cancer “results from the malfunction of cells in a given organ, which stop modifying to perform their function, multiplying in an anarchic way”, explains doctor Teresa Almodovar. Being a malignant tumor, there is the possibility of expanding to other organs, through the so-called metastases, which can be located in various organs, most frequently in the brain, liver, bones or adrenal glands.

As for the main cause and the number one risk factor for the development of this type of tumor, the specialist’s answer is unequivocal: “Smoking is the biggest risk factor that exists, being responsible for about 85% of cases of breast cancer. lung”. However, she points out that the tumor can also develop due to passive smoking or exposure to other polluting elements, such as radon. “Right now, environmental exposure is a very big concern, particularly in more developed countries, where smoking is already less prevalent. In countries where smoking has not yet been so eradicated, lung cancer continues to be mainly caused by tobacco”, says the also director of the Pneumology Service of the Portuguese Institute of Oncology in Lisbon.

“Smoking is the biggest risk factor that exists, being responsible for about 85% of cases of lung cancer”
Teresa Almodovar, president of the Lung Cancer Study Group

Even so, “there are also cases of people with lung cancer who are not smokers or have maintained passive or environmental exposure”, speaking here of lung cancer mainly related to genetic alterations. However, the expert warns that it is not a hereditary issue, but “a genetic alteration that develops in the person”.

Late and non-specific symptoms
One of the biggest challenges of lung cancer lies in the fact that it can develop “without showing symptoms for a long time”, recognizes the specialist, “and, when it does show signs, these are common to other respiratory diseases”. Cough with or without sputum, shortness of breath, fatigue, blood in the sputum and chest pain are some of these symptoms. Later, when the disease spreads to other organs, symptoms can include generalized tiredness and, depending on the areas of the body it affects, “it can cause pain in the bones if it spreads to the bones, as well as changes in behavior or changes in sensitivity or of mobility if it spreads to the head”, he lists. “The fact that it is a disease that, in the initial situations, does not give symptoms, allows the tumor to grow without the person knowing it, and when it does show symptoms the disease may already be advanced”, he says, adding that “the treatments in these advanced stages are relatively ineffective, although they offer improvements”.

Faced with the first symptoms, there is only one recommendation: seek advice from the attending physician as soon as possible. “The specialist in General and Family Medicine knows the necessary procedures, which include asking for a CT scan [Computerized Axial Tomography] of the chest”, says Teresa Almodovar. The diagnosis of lung cancer is made in the context of the specialty of Pneumology, but “not everyone who has these symptoms has lung cancer, which is why the recommendation is to go to the attending physician”.

How is treatment decided?
There are several types of lung cancer, so knowing which type is involved, as well as determining the stage it is in in terms of evolution, is a priority in deciding which treatment is most appropriate. Most lung cancers, around 80%, are non-small cell lung cancer (NSCLC) and the most common tumors here are adenocarcinoma and squamous cell carcinoma, also known as squamous cell carcinoma. According to the pulmonologist, “adenocarcinoma is the tumor in which there are more treatable genetic alterations and, therefore, it is the tumor most frequently treated with targeted therapies”. “Squamous or squamous cell carcinoma is becoming less and less frequent, because it is due to very marked smoking habits, such as unfiltered cigarettes”. The remaining 20% ​​are small cell lung cancer (SCLC) type.

“The fact that it is a disease that, in the initial situations, does not give symptoms, allows the tumor to grow without the person knowing it, and when it gives symptoms the disease may already be advanced”
Teresa Almodovar, president of GECP

According to the president of GECP, “a complete evaluation of the disease always involves performing a chest CT scan, as well as a diagnostic test, which is usually a fiberoptic bronchoscopy – a test in which a tube is inserted through the nose to collect material from the lungs – or a CT-guided transthoracic needle aspiration”. In addition, a PET (Positron Emission Tomography) is performed to detect the possible presence of carcinogenic activity in the entire body. A head image exam can also be performed – for example, a CT scan or an MRI – to know exactly the extent of the disease.

In addition to determining the type and extent of the tumor, it is also necessary to assess the patient’s health status, that is, “to understand if the person has the physical conditions to be treated”. To discuss all of this, “a therapeutic decision-making meeting should be held, in which all physicians from the various intervening specialties are heard. After that, the therapy is decided”, she clarifies.

Therapeutic innovations bring hope
Regarding NSCLC, this “is treated with the same therapeutic weapons as most cancers, that is, surgery, radiotherapy and systemic therapy”. The latter includes, in addition to classic chemotherapy, immunotherapy and targeted therapies. According to Teresa Almodovar, “when the disease is local, that is, only contained in the lung, surgery is usually the best decision. When the disease is in the lungs and elsewhere, but always in the thorax, surgery is combined with other therapies, namely chemotherapy, radiotherapy or immunotherapy. When the disease is systemic, that is, it has spread outside the chest, it is usually treated with chemotherapy, or immunotherapy, or targeted therapies”. “This decision depends on the type of tumor, which is why it is important to know it”, she reinforces.

Fortunately, also with regard to lung cancer, science has allowed considerable advances. The doctor highlights the possibility of making a treatment aimed at those who have certain genetic alterations, namely, the mutation of the EGFR gene and the translocation of the ALK gene. At issue are targeted therapies with oral drugs that “allow longer life and better quality of life” to patients who have those specific characteristics.

On the other hand, he particularly emphasizes immunotherapy as an important innovation. “At the moment, immunotherapy has greatly changed the perspective of treating these patients, so it will be the most significant advance in global terms”, she stresses. Another notable progress is the “possibility of more targeted radiotherapy, both for treatment and palliation of symptoms”. In the words of the doctor, this “is very important when doing radiotherapy with chemotherapy, because it allows a treatment with less toxicity to the lung, in addition to being very important for the treatment of metastases, namely, when there is brain metastases”.

Communication and stigma: the challenges
Asked about the main challenges that this disease poses, the specialist points to communication and health literacy as major problems to be solved. On the one hand, and as already mentioned, “people need to be aware that the identified symptoms may be lung cancer and seek a doctor”. But it often happens that “people let themselves go”, largely due to the fact that the symptoms are “very banal”, especially in the early stages. On the other hand, “there is an important stigma in relation to lung cancer, because it is linked to smoking habits, which are frowned upon”, he recognizes, in addition to that “there is the notion that this is a cancer with a poor prognosis and it is difficult to people face this situation”.

Awareness of this disease should also be raised among health professionals who are closest to patients, as they “don’t always think that the symptoms could be lung cancer”, he observes. That is, the complaints must be valued and the possibility of dealing with this pathology must be equated.

In more general terms, with regard to access to diagnosis and treatment, he argues that “there are various types of difficulties, but they vary according to the hospitals, that is, there is no difficulty common to all places”.

Screening: a possibility in the future
Taking into account the high mortality caused by lung cancer, would it make sense to implement a screening program? Teresa Almodovar confirms that “there are studies carried out, both in the US and in Europe, which allow us to say that a screening program reduces mortality from lung cancer by diagnosing the disease at earlier stages”. However, “at this moment, there is still no screening in Europe at a global population level”, although this could happen soon, since, in 2019, “the European Union adopted and advised the screening of lung cancer”, which is to be considered by several countries, namely by Portugal.

However, it is important to emphasize that a screening program involves much more than just carrying out an exam, that is, it includes “an entire decision tree related to exams and therapies, according to what is found in the first exam”, explains the doctor , with the need to follow the person over time. This is because “the screenings evaluate the population during the years in which it is at risk”. But the truth is that none of this replaces seeking medical advice in case of symptoms, not least because “the examination carried out by screening may not indicate the presence of any alteration today, but this will eventually develop in the following month”. So, remember: if you have suspicious symptoms, see your doctor as soon as possible. Your life may depend on this gesture.